For accuracy and distance the most important element of your cast is holding down the line until the power stroke is complete. Its not easy and can be very painful without some mechanical device. The most popular is the Breakaway Cannon an original concept of Mr Alfred Priestleys.
The Cannon is mounted under the rod in line with the rings and as near to directly over the spool. Unfortunately there is a wide variety of reels and reel fittings and many vary as to how they are fitted. Attach the Cannon onto the rod with insulating tape until you are happy with its position.
Always check that your clutch is tight before casting in areas where big fish are regularly caught winding your leader around the Cannon three times will allow you to cast with a light clutch fitting.
An email we got from a customer in USA, we loved it so much, we had to paste it here for you to read!
I've got a pretty cool story to tell you that involves a Cannon. I've been going to Eldorado Park lately for casting practice. I've met a few of the regulars that fish there.

One guy is probably around 60 yrs old and is handicapped. He went thru the windshield of a car while on the freeway ,leaving his arms and hands really jacked up. He fishes spinning rods and has a hell of a time casting. He lost a lot of dexterity in his hands and has adopted a very funky system to cast his rod. He cannot hold and release the line normally with his right hand. He holds the rod at the reel seat with his right hand and loops the line down to his left hand on the rod butt. He has to release the line with a finger on his left hand.

Needless to say his casting sucks. His buddies cast for him when they are there, but he's stuck with really short casts if he fishes alone.

I started wondering if he could use the Cannon. I kind of doubted it and thought he may not even be able to wrap the line around it. I had to find out so I went home and picked up my Cannon and a roll of electrical tape. I got back to the park and mounted it on his rig. I loaded it for him and he fired off his first cast with it. He was so use to casting short that he didn't even see where it went. I told him to look further out next time. He fired off another one and saw how far out he was getting. He instantly got excited! He had a hard time getting the line loaded on the Cannon, but after a few times he was already figuring out what he had to do to make it work.

He could not thank me enough. He was so excited that he wouldn't have to get his buddies to cast for him anymore. He couldn't wait for one of them to show up so he could show off a little. He was excited to practice with it to get even better.

I can't tell you how much that meant to him. He explained to me that two things he really missed since his accident was playing the guitar and casting his fishing rod. He said the Cannon was made for him and he went from handicapped to handicap able.

It was truly a victory for him.

I didn't have the heart to take the Cannon off of his rod so I told him that he could borrow it until his got here,lol 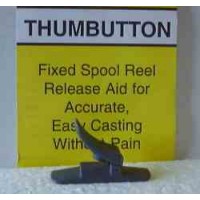 The Thumbutton does a simular job as the Cannon but fits on top of the rod and is held down as you w..